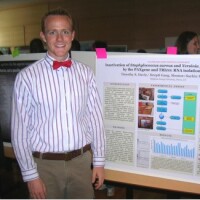 
Tim Davie worked in the Nematode Evolution Lab from July 2005 until December 2007. Although he participated in many of the projects that went on in the lab during those two and a half years, his main focus was on elucidating the phylogeography of the genus Tardigrada. Tim was married to Sydney Riding in January 2008, and will be attending medical school starting in the Fall of that year.