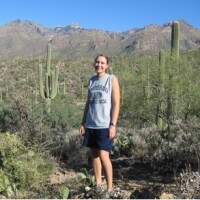 
I am a first year PhD student in Microbiology at the University of Arizona. I am currently working on a couple of projects, but the main project I am working on deals with enterotoxigenic E. coli (ETEC). After I am done with my PhD, hopefully in four years, I plan on continuing research, but I am not sure exactly where or in what. However, I suspect I will stay in bacteriology.


Here’s an abstract for my current project that I will presenting in December in Austin, Texas at the US-Japan Conference on Choler and Related Bacterial Enteric Infections.

ECP is produced by commensal and pathogenic E. coli strains, including ETEC, and may represent a novel mechanism of adherence of intestinal and extra-intestinal E. coli. ECP plays an important role for E. coli O157:H7 in colonization of host epithelial cells. This pilus is unrelated to any of the known CFs of ETEC and is composed of a 21-kDa protein subunit. In this study, we aimed to investigate the association of ECP with strains producing or not the known CFs. We studied a collection of 45 human ETEC strains among which ecpA, the structural pilin gene was found by PCR to be present in 39 (87%) of them. In addition, we found optimal growth conditions for the production of ECP in ETEC to be pleuro-pneumonia-like organism (PPLO) broth incubated at 37° with 5% CO2 atmosphere. Under these conditions, 12 strains (27%) produced ECP among which, 7 (58%) strains also produced other CFs while 5 strains were CF-negative, as determined by various immunoassays. The percentage of strains producing ECP is comparable to the frequency of the most common CFs, namely CFA/I, CS3 and CS6. Ongoing studies will determine the reactivity of convalescent sera from human ETEC infections to ECP and genetic studies will reveal if ECP mutants are deficient in cell adherence. Our data suggest that ECP could potentially be an important adherence determinant of ETEC.

J. M. Chaston, T.. Bliss, A. R. Dillman, and B. J. Adams. Conservation of Luminescence Genes in Photorhabdus luminescens. Paper presentation at the 2006 Meeting of the Society of Nematologists.

D. Blackburn, C. Bailey, A. Smith, J. M. Chaston, and B. J. Adams. Development And Isolation Of A Stable Primary Phase Variant Of Photorhbdus Luminescens. Poster Presentation at the 2006 Meeting of the Society of Nematologists.

, J. M. Chaston, and B. J. Adams. Investigating Why Luminescence Genes Have Been Evolutionarily Preserved in Photorhabdus luminescens. Poster Presentation at the 2006 Intermountain-Branch Meeting of the American Society of Microbiology.