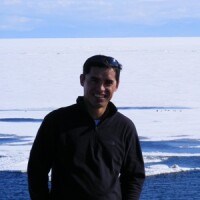 
I am broadly interested in the stress biology of nematodes. Currently I am working on the stress survival of Antarctic nematode Plectus murrayi Nematodes of the Antarctic McMurdo Dry Valleys are part of a community of organisms that are living in one of the harshest environments on Earth and desiccation is a significant challenge to them. Nematodes like P. murrayi which can survive anhydrobiosis as well as freezing temperature; have the adaptations necessary to slow the rate of water loss. Though the morphological and physiological mechanisms governing anhydrobiosis in Antarctic nematodes are well studied, the knowledge of molecular mechanisms is severely lacking. I am using a comprehensive approach to the study of the molecular mechanisms of P. murrayi by constructing cDNA libraries, identifying differentially expressed transcripts of desiccated nematodes by subtractive hybridization and testing the functionality of these stress related genes using gene knockout methods. I am now been working with almost 2500 expressed sequenced tags (ESTs) of P. murrayi and analyzing them using different bioinformatics tools for Blasting, mapping, annotation, statistical analysis and visualization. Preliminary results reveal that P. murrayi uses a suite of global stress tolerance response genes that are triggered by desiccation.

I am also interested in studying the deterioration of beneficial traits in Entomopathogenic nematodes (EPNs). Entomopathogenic nematodes in the families Heterorhabditidae (Strongyloidea) and Steinernematidae (Strongyloidoidea sensu) are biological control agents that serve as exceptional models for the study of parasitism, pathogenicity, and symbiosis. These nematodes form mutualistic symbioses with insect pathogenic bacteria in the family Enterobacteriaceae: heterorhabditids are associated with Photorhabdus and steinernematids with Xenorhabdus, respectively. The infective juveniles (IJs) or dauer (enduring) juveniles persist in soil in search of a suitable insect host. Following entry through the cuticle or natural body openings, the IJs release the symbiotic bacteria into the insect hemocoel, which rapidly kill the host, usually within 24-48 h. Nematodes feed on symbiotic bacteria and digested host tissues, complete 1-3 generations in the host cadaver, and as food resources are depleted new IJs are produced which disperse in search of new hosts. In the laboratory, each partner can be cultured separately, but when combined they present a high degree of specificity. These EPNs are cultured for experimental or commercial purpose using in vivo or in vitro methods. These nematodes are used as biological control agents against a wide array of insect pests. The success of these biological control agents depend on key traits, particularly compatibility with the target pest, reproductive potential, host-finding ability, environmental tolerance, and ability to be cultured. These traits, however, can deteriorate rapidly, and substantially when a biological control agent is isolated from nature and reared in the laboratory, or mass-produced for commercial purposes. Genetic and non-genetic processes may be responsible for trait deterioration in laboratory cultured biological control agents. My research seek to understand the mechanism behind trait deterioration and stress survival of EPNs. Stress is a universal phenomenon and a major constraint to the application of EPNs in natural environment due to their effect on survival, pathogenicity and longevity. We are using molecular genetic approches to understand the mechanisms of tolerance to desiccation, heat and osmotic stress.