A new, $4.7 million state-of-the-art science building at Molokai High School will afford its students the use of lab facilities for the first time since 2004. The 4,500 square foot structure with two classrooms will also allow MHS students — some of whom have already won international recognition for their work in science — to further their research.

“Our kids deserve the best and they’ve put out nothing but the best,” said Molokai county councilmember Stacy Crivello at the building’s blessing last Wednesday. “We’re resilient and always make due and our students have more than made due. They have brought so much honor to our island.”

Last week’s dedication ceremony marked the completion of construction that began in the summer of 2015. The school has not had the use of science labs since the middle and high schools split campuses more than a decade ago. MHS Principal Stan Hao said the new facility has been discussed for about 25 years, when he first came to the school as a teacher. 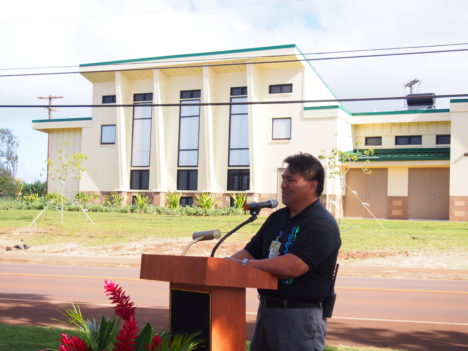 In 2010, when Hao returned as principal, he reinitiated the conversation. But the economic downturn in 2012 brought bad news.

“[The state] told us they only had money to renovate… our dreams were shot,” recalled Hao. “In lieu of having a science facility, they gave us a rolling science cart, with some technology and tools on it.”

Hope returned in 2013, when the governor announced the released of funding for science education upgrades, and Hao said the school applied immediately. Funding was appropriated for planning the building, but when architects showed him the plans, he was disappointed in the materials and design. 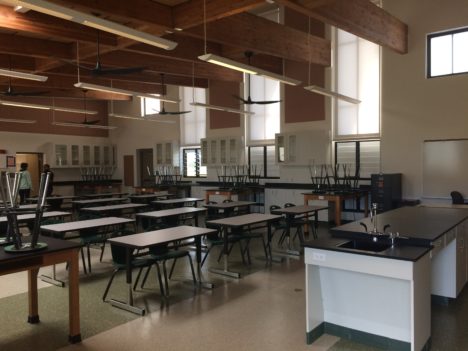 Inside one of the new facility’s two lab classrooms. Photo by Catherine Cluett Pactol

The two lab spaces each include movable stations and seating, and the facility meets current requirements for science lab classrooms, such as built-in safety equipment. It also features an environmentally friendly and sustainable design. Hao said the building’s high ceilings draw heat upwards, where it exits the building, and interactive lighting dims or brightens based on outside light levels. A water catchment system conserves resources, and solar panels will generate renewable energy.

“Over the years, the faculty and students at Molokai High have set a high bar with its Science, Technology, Engineering and Math (STEM) education,” said Dept. of Education Superintendent Kathryn Matayoshi.  “While the school has received many awards for its STEM projects, this new facility allows for even more innovation to occur.”

Sophomore Evelyn Haase fought back a wave of emotion as she walked into the building for the first time.

“This means everything to me,” she said, looking around in awe. “This is a dream come true… Now I have more pride that I am from here and now I’m going to have the resources to work on my research.”

Haase’s award-winning research in ocean acidification and development of a ground-breaking pH sensor requires a clean, controlled environment which she said the school couldn’t previously provide.

The leading pH sensor costs about $13,000, she explained, which was cost prohibitive for her. Yet she found cheaper sensors were difficult to use and didn’t yield reliable results.

“I wanted to create a device with easy instructions that could be replicated and cheaply made to expand the world’s knowledge of ocean acidification,” she said, calling her field of study just as important but less well-known than climate change and ocean rise.

Using her living room as a lab, she has been successful in creating a pH sensor for about $300 — a 36th of the price of the industry’s leading device — that she said is up to 10 times for accurate than its pricey counterpart. She said in developing a sensor that’s cheap and easy to make, she hopes it will make the study of ocean pH accessible to both students and scientists around the globe. 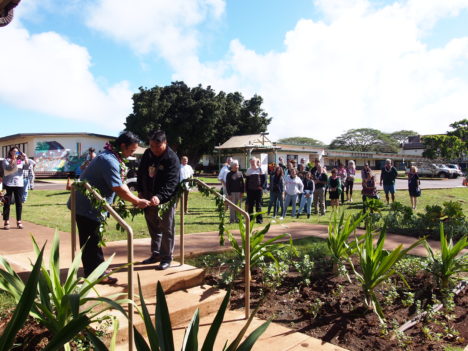 Untying of the maile lei during the building’s blessing. Photo by Catherine Cluett Pactol

Along with the new lab, Haase and other MHS students have another huge resource. Dr. Keoni Kauwe is a ’96 MHS graduate, associate professor of biology at Brigham Young University in Utah and an internationally acclaimed researcher in the field of Alzheimer’s genetics. Hao said he maintains close ties to Molokai and has assisted in raising funds and developing curriculum for MHS science students.

Kauwe said when he heard about the new building, he reached out to resources both on Molokai and Utah, raising $20,000 for the purchase of equipment and supplies needed to teach advanced sciences. He said he and a group of his students will visit regularly to train and support MHS science teachers and students. He also said select Molokai students will be able to spend a month at Brigham Young where they can work in a lab related to their research.

Additionally, he said he spent hours talking with “champions of the land” on Molokai.

“[We talked] about cultural practices for conservation and the interface between scientific work that I am doing and the important work that they are doing to honor and preserve the cultural legacy of Hawaii,” he said. “I am confident that we can develop scientific efforts that allow MHS students to fulfill the vision of MHS, which is to ‘honor the past, embrace future innovation, and take personal responsibility for delivering excellence.’ I believe that MHS and this generation can be educated in ways that allow thrive in the current scientific world while honoring the incredible heritage of science and engineering that our ancestors left for us.”

Don't have a Molokai Dispatch ID?